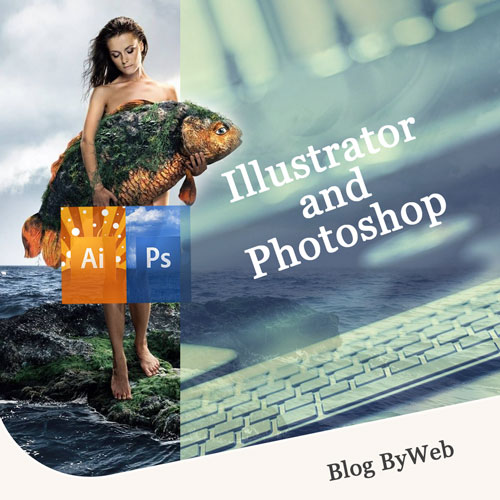 As we’ve said before, your business’ logo is often the first impression that people get of your business. While copy is very important as well, most people are very visual, so a logo will stick in their mind – good or bad. Your logo is a major part of your branding, so it’s important to make sure that the final logo you choose best represents your business and will resonate with people in a positive and accurate way.

A lot of designers use the winning combination of Adobe Illustrator and Adobe Photoshop when creating logos. Since both Illustrator and Photoshop are part of the Adobe Creative Suite, if you’ve purchased the Suite, it’s almost certain you will have both programs. Designers commonly alternate between the two programs, to create logos that work.

While Adobe Photoshop was created primarily in order for designers to edit and alter photographs, many designers choose to use Photoshop in the early stages of designing a logo and then sporadically throughout the logo design process to adjust details of the design, as you might a photograph. The main reasons designers often favor Photoshop when working on logos, is because it is easy to use, and offers a breadth of functions.

It’s important to note, that while both Photoshop and Illustrator have their individual benefits, each member of the Creative Suite should be used properly.

Illustrator is vector-based and works with much more complex graphics such as advertisements and maps. Where Photoshop images can become blurry when enlarged, Illustrator vector-based files will not blur at large formats, so it’s best used when creating large-scale advertisements, such as subway station dominations or billboard advertising. Image resolution is retained using Illustrator, at any size.

When to Use Photoshop and Illustrator

When working on small-scale projects, Photoshop can work wonders in getting into the smaller, finer details of the image and manipulating it exactly as directed. Photoshop offers a range of features, such as cropping, Photomerge and layers and is especially helpful when working on minute details for small scale projects, such as logos that will only ever be used online or small-scale marketing materials.

Illustrator is ideally used for large-scale materials, since images in Illustrator will never lose their quality. So if you’re working on a large-scale project, such as a logo that will appear on the side of a bus, it’s best to use Illustrator, as your logo will always appear as intended.